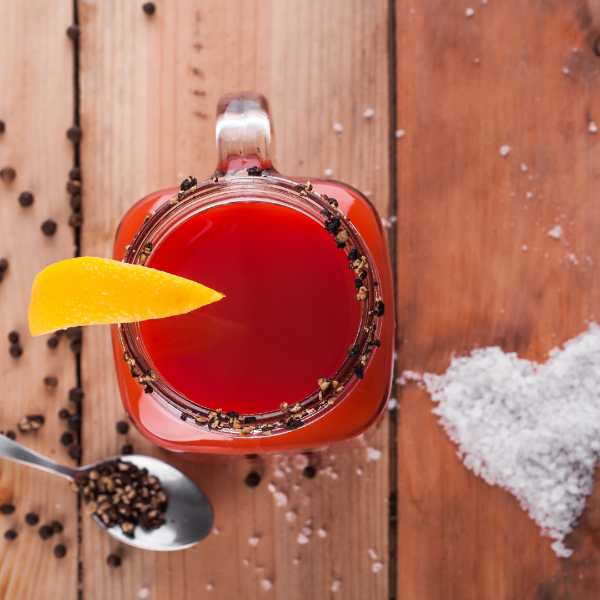 The Bloody Mary is more than 80 years old.

That’s how long ago it was when a Parisian bartender named Fernand Petiot reportedly invented the drink in 1921 at the New York Bar in Paris.

Vodka had been newly introduced to Paris by Russians escaping the Communist revolution. Couple that with an influx of American ex-patriots who brought with them the concept of “mixed drinks” and you’ve got the makings for what we now consider a brunch staple - the Bloody Mary.

But before it became known as the Bloody Mary, it went through a few name changes. First it was the “Red Snapper” and later the “Bucket of Blood” before finally settling in with its current moniker.

The vodka drink finally washed ashore in America during the early 1930s when Petiot began bartending at the King Cole Bar in New York. Originally the drink consisted of black peppercorns soaked in vodka, tomato juice, Worchestshire sauce, and some other basic ingredients.

These days the Bloody Mary has taken on a diverse identity depending on where it's being served.

Jacksonville is home to both far out concoctions of the cocktail, and renditions that remain true to its traditional form.

At Another Broken Egg Cafe, the “Bloodys,” as they’re known are simple with hints of complex flavors. The restaurant has its own in-house Bloody Mary mix. Cucumber, fennel, and tomatillos are some of the ingredients and flavors they use to ramp up the flavor of the drink. A standout is the Lemon Fennel Bloody Mary, which features lemon vodka, and fresh fennel.

Brunch is not complete without a good Bloody Mary at the Blind Rabbit: A Burger and Whiskey Bar in Jacksonville Beach. By the name you’ve probably guessed what’s on the menu at this brunch - burgers. The restaurants brunch cocktail menu pairs perfectly with its food offerings. Their basic Bloody Mary is garnished with savory pickled okra and celery. And what goes better with burgers than bacon? Kick it up a notch with the Bacon Bloody Mary, featuring bourbon, bacon, jalapeños, tomatoes and celery.

Go back to where it all started. Rue Saint Marc is a quaint French restaurant in Jacksonville that serves some of the most decadent food along with a simple yet delicious Bloody Mary. If you are looking for a Bloody Mary the way Petiot intended it - then this is your place. The Rue Bloody Mary only includes four ingredients: vodka, tomato mix, dill, and horseradish. The spicy libation goes well with French offerings on the menu including Croque Monsieur and Quiche Lorraine.

Stay with us here:
Return