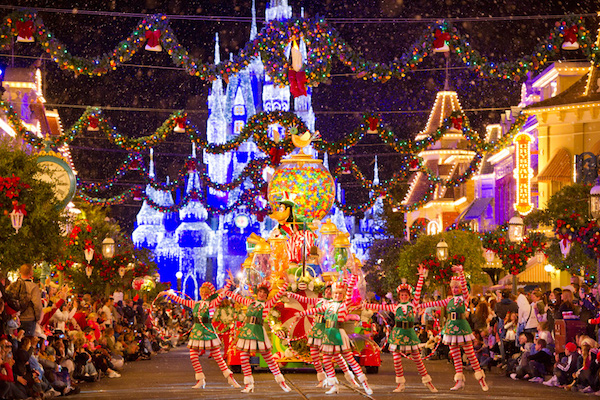 Orlando is a magical place to celebrate the holidays.

From theme parks in lights to a thriving decked out downtown, there’s something for everyone who wants a little holiday cheer.

Harry Potter fans can head over to the Universal Orlando Resort to experience Christmas in The Wizarding World of Harry Potter from November 17 – January 6. Fans will recognize the normal haunts like Broomsticks and Diagon Alley decked out in holiday decorations.

If you’re looking to avoid the Disney crowds then downtown Orlando is a great option for holiday events.

The holiday season’s kickoff happens on November 30 at the City of Orlando Annual Tree Lighting Celebration at Lake Eola Park from 5 p.m. to 9 p.m. The six-story Christmas tree features more than 80,000 lights. There will also be live entertainment and plenty of yummy food vendors. It’s the perfect way to segue from Thanksgiving to Christmas.

Make it a weekend excursion and explore nearby historical landmarks like the Thornton Park District and the Orange County Regional History Center. The Hampton Inn & Suites Orlando Downtown offers a complimentary shuttle within a 2-mile radius.

Located just outside of downtown Orlando is Baldwin Park, a suburban neighborhood with an urban feel. Restaurants, coffee shops and boutiques line the brick streets of Baldwin Park. New Broad Street is the center of the neighborhood and also the place to find holiday fun this year.
Check out Winter Spark Baldwin Park on Saturday, December 8 from 4 p.m. to 8 p.m. This annual event features train rides, food trucks, photos with Santa and a parade.

Just east of Baldwin Park is the campus of the University of Central Florida. Each year the university host the very popular Light Up UCF. From November 16 – January 1, you can enjoy ice skating, free holiday movies, entertainment, photos with Santa, a Ferris wheel and kids train rides. The over the top holiday celebration is held at the CFE Arena and open to the public.

Looking to travel to the area for Light Up UCF or Baldwin Park holiday events? Check affordable hotel rates at the nearby Fairfield Inn & Suites Orlando East.